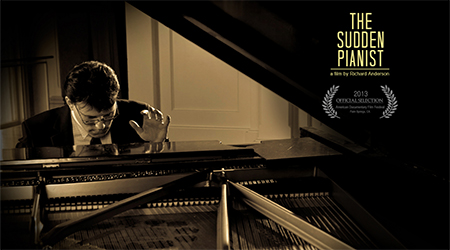 Join Michael Hersch, Peab '95, '97, composer, pianist, Peabody faculty member and recipient of the Peabody Conservatory Young Maestro Award, and fellow Hopkins alumni for a sneak peek of the Maryland premiere of "The Sudden Pianist."  Filmmaker Richard Anderson has created an intimate portrait, shedding light on this aspect of Hersch's music making with never before seen or heard footage of Hersch performing his own work at the piano - from his debut to the present day. There are also rare interviews throughout with Hersch. The film is a moving journey into the mind of one of America's most unique artists.  While much has been written about Hersch's gifts as a composer, his abilities at the piano have been witnessed by few, as he shuns most public performances.

"The Sudden Pianist" was chosen as an early entry to the American Documentary Film Festival 2013; one of only 100 films selected from over 1,200 entries.  Filmmaker Richard Anderson and pianist Michael Hersch will discuss the making of the film and answer questions. Refreshments will be served.