"Running Late with Scott Rogowsky" at Carolines on Broadway 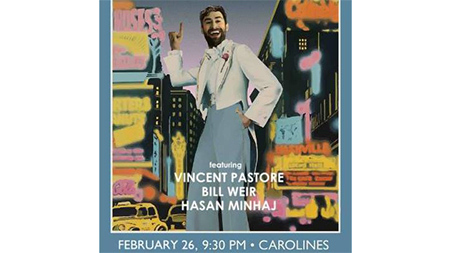 Online registration has now closed however, you may still attend the event by paying $20 at the door.

Ten years ago, Scott Rogowsky, A&S'07, took an Intersession stand-up comedy class at JHU. Who knew that ten years later the class would become an annual JHU institution and Scott would be headlining at one of the top comedy clubs in the country? From Shriver Hall to Carolines on Broadway!

A great way to celebrate Commemoration Day; go see this hilarious show with other JHU alumni. Hosted by the JHU Arts, Entertainment, Media and Entrepreneurship Affinity, your $20 registration includes a ticket for the show featuring Scott and his guest line-up including Vincent Pastore, Bill Weir and Hasan Minhaj. It also includes 2 drinks and a special JHU seating block so you can join in an evening of entertainment with your Hopkins network and friends.

Optional: Carolines offers an a la carte menu if you would like to dine during the show.