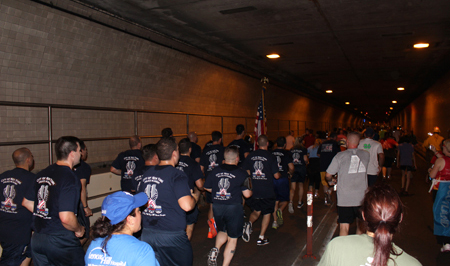 The Tunnel to Towers 5K Run & Walk was created to honor Stephen Siller, a New York City firefighter (FDNY) who died on 9/11/01. The 5K route follows his last footsteps on the morning of 9/11 when he was off duty in Brooklyn after working his night shift. Upon hearing of the attack, Stephen tried to drive through the Brooklyn Battery Tunnel to reach Lower Manhattan, but it had already been closed. Rather than simply returning home, he strapped 60 pounds of gear to his back and raced from the Tunnel to the Towers, where he gave up his own life to save others.

The JHU team is being led by Arts, Entertainment, Media and Entrepreneurship (AEME) Affinity volunteer Dory Giannos, A&S 2010, who says "...it is an amazing experience running alongside 30,000+ people who came from all over the world to honor those who lost their lives on 9/11..." She has invited her Hopkins network to join this quintessential NY event in the past but would like to welcome all JHU alumni to share in the meaningful experience this year. From New York natives to those who are just moving to the Big Apple, from recent graduates to the Old Guard, this is a chance to present JHU as One University in NYC.

Not a runner? Don't want to walk with the team? No problem - the participants will appreciate encouragement along the route. Join fellow JHU alums at the Esplanade in Battery Park or at the finish line. After the race, all pre-registered cheerer and runners are invited to meet up at Distilled for an informal gathering with food and drink.

Runners & Walkers: Complete details can be found on the registration link.
Non-runners: Must pre-register by contacting the Office of Alumni Relations by telephone 1-800-548-5481 or email alumevents@jhu.edu before September 20 so that we can have enough space, food and a drink for everyone.

Free Transportation:
To the event: NY Water Taxi boats will leave from Pier 11, at the end of Wall Street, beginning at 6 AM.  The last boat leaves for Brooklyn at 7:30 AM.
PLEASE NOTE: You must be on the boat line by 7:30 AM to get to the start line on time!
From the event: As long as you have a Bib on the front of your shirt, From PIER 11, NYC back to Brooklyn, IKEA, your ride will be free of charge!

Dory has graciously offered to pick up the bibs and have them available at the starting line on race day if you would like. Otherwise, packet pick-up is as follows:

Bib numbers/packets can be picked up at the start of the run, at IKEA parking lot in Brooklyn, NY.  However, we request that you pick up your bib number/packet prior to the day of the run at the following dates/locations:
REGISTRATION/VOLUNTEER PHOTO ID AND PACKET PICK UP SITES:
Staten Island - Campus St. John's University
Wednesday 9/21 & Thursday 9/22
2PM - 7PM
Kelleher Center-2nd Floor
300 Howard Avenue
Staten Island, NY
Manhattan - The Conrad Hotel - East Lobby
Friday 9/23 & Saturday 9/24
9 AM – 4 PM
102 North End Avenue
New York City, NY

For more information on
Tunnel to Towers Foundation:
http://tunnel2towers.org/