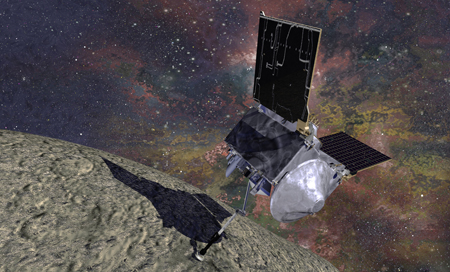 NASA recently launched an unprecedented mission that has generated a lot of excitement and media coverage.Why? Because OSIRIS-REx seeks answers to the questions that are central to the human experience: Where did we come from? How did life start? What is our destiny?

The quest to map and send back interstellar material from Bennu, a carbonaceous asteroid containing leftover debris that could date back to the very start of the solar system, may answer these questions and teach us volumes about the history of the sun and planets.It may also answer how near-Earth asteroids could affect our planet in the future because Bennu is one of the most potentially hazardous asteroids with a relatively high probability of impacting Earth late in the 22nd century.

Speakers:
Dr. Jason Dworkin is Project Scientist for the OSIRIS-REx Mission, Chief of Astrochemistry at Goddard Space Flight Center, and Director of Goddard’s Astrobiology Analytical Laboratory.  He is interested in studying the origin of life by understanding the organic makeup of meteorites and other samples from primitive objects.

David Everett is Project Systems Engineer for the OSIRIS-REx.  In his 25 years at NASA, he has led the design, build, and launch of four spacecraft, and he was a key player during the launch of three others. Mr. Everett also led the technical effort for the Lunar Reconnaissance Orbiter as the Mission Systems Engineer, from design through early-orbit operations.

Refreshments will be served.