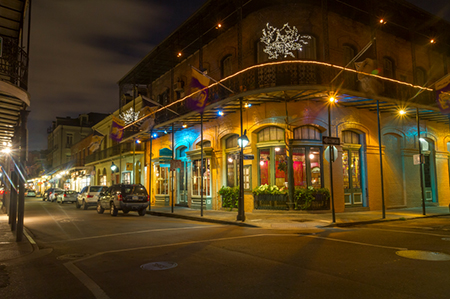 If you’ve never been to New Orleans, or haven't returned since Katrina, now you can experience an insider’s view of The Crescent City during three days of tours, talks, and fine dining.  Get up close to the Creole tradition, jazz music, river life, the sacred and the profane; understand the conundrum of a city bound by its rich past, destruction and rebirth, and its struggle to maintain its authenticity. Dr. Fred Starr will share his vast perspective on  the life of the city from its music to architectural preservation and the Mardi Gras scene. In addition to Dr. Starr, your guides to this New Orleans cultural immersion will be  historian Michael Johnson, geographer Richard Campenella, and culinary historians Susan Tucker and Poppy Tooker. Enjoy the camaraderie of fellow Johns Hopkins alumni while learning from the natives, characters, and experts -- true New Orleans insiders -- about The City That Care Forgot.

Faculty:
S. Frederick Starr, Washington, D.C., is chair of the Central Asia Caucasus Institute at Johns Hopkins University’s School of Advanced International Studies. The former provost at Tulane University and a jazz clarinetist, he is the author of six books on New Orleans, including New Orleans Unmasqued.

Michael Johnson is Professor of History at Johns Hopkins specializing in 19th c. U.S. history with emphasis on slavery and the South.

Hotel Monteleone
This venerable New Orleans hotel sits majestically at the foot of Royal Street in the French Quarter.  A member of the Historic Hotels of America, the Monteleone boasts luxurious guest rooms, the famous Carousel Bar and Lounge, new Criollo Restaurant, heated rooftop pool, and a day spa, among other amenities.

Cancellation policy applies
A minimum number of participants is needed to operate the program. There has been strong interest in this program so reserve early. As always we strongly recommend that you consider obtaining travel insurance.