One Ring, One University.

History of the Class Ring

History of the University Seal

Adopted by the board of trustees on December 7, 1885, the seal represents the university’s dedication to the advancement of knowledge in service to the community and the world. The design originates from the collaborative work of Baltimore historian Clayton C. Hall, Esq., and Stephen Tucker, Esq., the Somerset Herald at the College of Arms in London.

The Ring Program and the Engaging Future Alumni Committee

A portion of the cost of the ring supports the Alumni Association and the Engaging Future Alumni Committee.

The Engaging Future Alumni Committee of The Johns Hopkins Alumni Council will award official university rings to nine eligible* students, one from each division, who have excelled in leadership activities and positively impacted the campus and/or the community while in school.

Based upon demonstrated need and interest, one official Celestrium Hopkins ring will be awarded to a student from each of the nine divisions. The recipients will be notified in early March so they can meet with the Balfour representative by mid-March.  The rings will be presented at the annual Ring Ceremony and Reception on May 23, 2023 at 5:30pm ET on the Johns Hopkins University Homewood campus in Baltimore, MD.

Ring Purchases and the Ring Ceremony

Each ring purchased from January 1, 2023 – April 13, 2023 will be held at the Balfour office and be shipped to campus for the Ring Ceremony. If you would like the ring shipped directly to you, please contact Jenn Fisher, JennFisher@jhu.edu.

"In 2000, I came to Shriver Hall to be part of that first group of ring recipients, I remember Shriver being packed at that time with loads of alumni and a fair collection of seniors such as myself.  It was most memorable and special being part of that first group.  In the late ‘70s there was a cartoon program on TV called the Wonder Twins, these twins had super powers whenever they touched their rings together and announced 'Wonder Twin powers activate!' As we were approaching finals on campus many of us that had the rings would often use this phrase as we touched our rings together in the hopes that super knowledge would flow freely.  I’m not saying I believed in it, but I did pretty darn well!

All joking aside, I had no idea at that time what wearing the Johns Hopkins University Ring would mean.  Fast forward a few years later and I am sitting on a flight coming back from a business trip overseas, a gentleman sits down next to me and before I can place my tray in the upright position, he announces, 'so you’re a Blue Jay?', needless to say we had a great conversation sharing stories about our time at Hopkins and how there are a network of alumni all over the world.  Since that time I have run into other Hopkins grads frequently and the ring really does have superpowers in that it connects all of us with a single symbol." 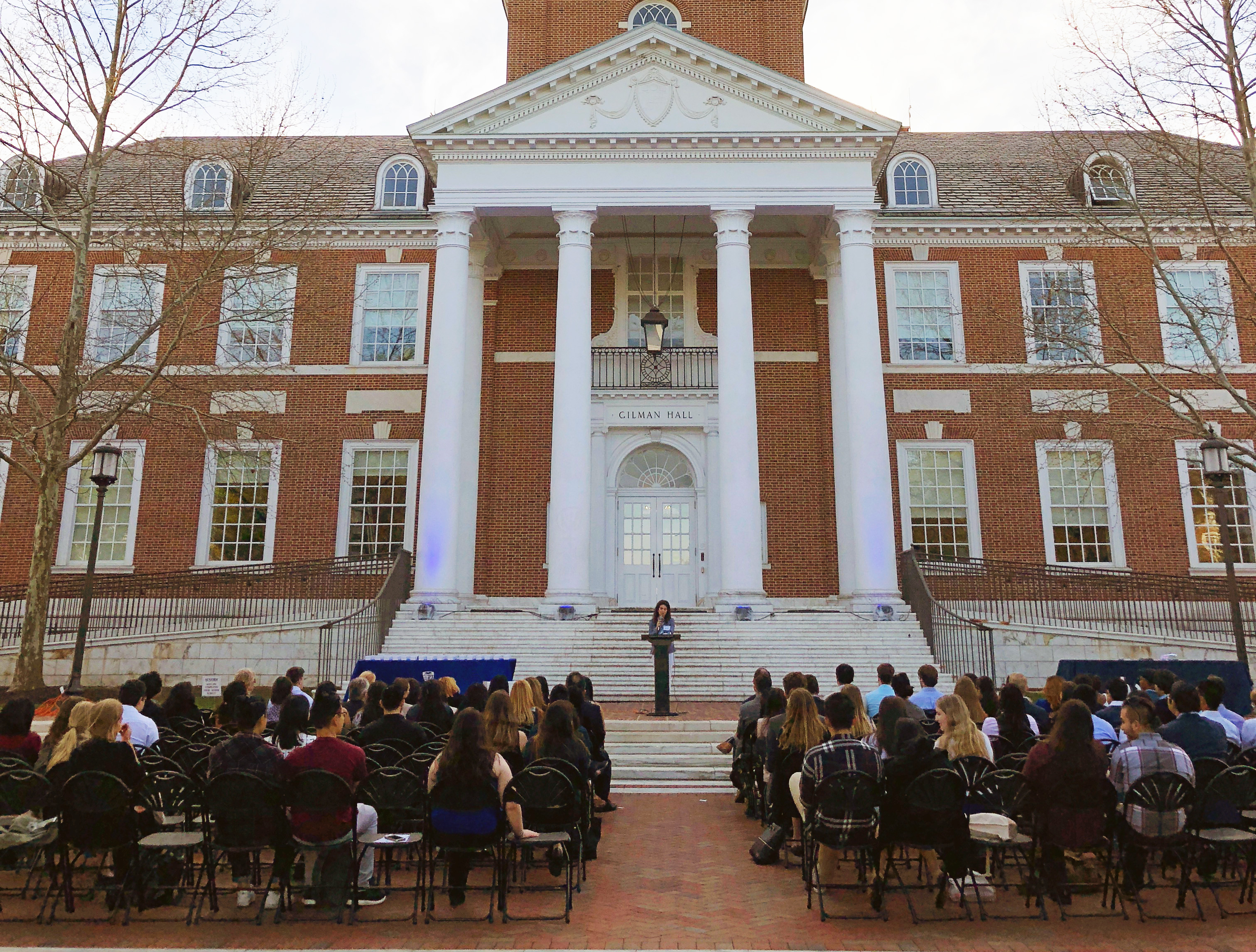 The 2023 Ring Ceremony will take place on May 23, 2023 at 5:30pm ET on the Homewood campus. For any questions, please contact Jenn Fisher at JennFisher@jhu.edu.

The application cycle for the 2023 caRING Program is now open!

Visit the Balfour site for all JHU ring details.
Balfour protects your purchase with a limited lifetime warranty that includes free resizing, cleaning, and polishing.

Payment Options
You can pay for your ring in full or via the following payment plans:

Graduates: One Year of Study

One Year of Study

Degree Candidates who have completed 12 or more credits

We Want to Hear from You

Tell us your ring story.
Send us your pictures!
Don't forget to use the hashtag #JHURing