New York, NY: Facts Machine LIVE! This is Your Brain on Brains 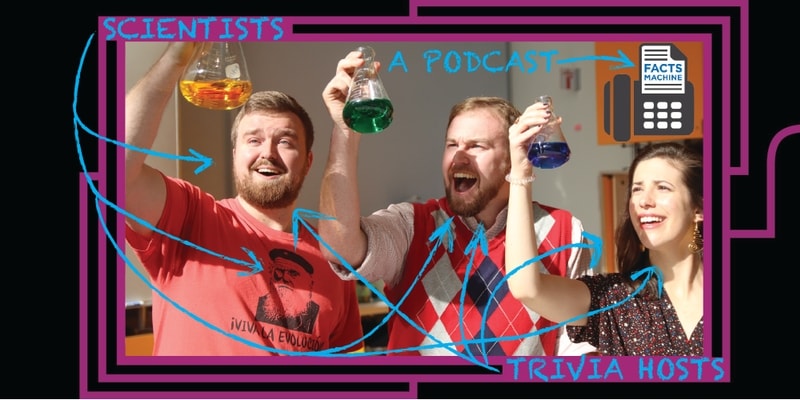 Sponsored by the JHU Arts, Entertainment, Media, and Entrepreneurship Affinity

Facts Machine is a show that asks and answers questions like: Why is the nation of Finland rising out of the ocean? What is the legal definition of a cookie? Why were the Apollo 16 astronauts so gassy? And which animals just really suck? In each episode of Facts Machine, we explore questions like these by sharing and discussing three fascinating facts and one pub-style trivia quiz, all loosely inspired by the episode’s theme (and accompanied by more than our fair share of puns along the way).

The theme this time is, "This Is Your Brain On Brains”! Accordingly, Facts Machine will be joined by neuroscientist, science communicator, open water swimmer, and flutist in two rock bands, Dr. Paula Croxson!

Please, join us on March 25th at Caveat in NYC as we get caught in neural nets, celebrate Dendritic Arbor Day, and fight for neurite to party!

Co-host Noah Guiberson got his start writing and hosting trivia nights in the rugged pub quiz circuits of Baltimore and New York. A Weill Cornell neuroscientist by day, he seeks to answer the greatest trivia question of them all: How does the brain work? His favorite fact right now is that the people of Paris HATED the Eiffel Tower when it was first built, with one going so far as to call it “a hole-riddled suppository.” Follow Noah @ArksAndSciences

Co-host Dr. Rob Frawley, PhD is an alumnus of Weill Cornell Graduate School where he studied orthopedics and cell biology. A long-time NYC Trivia Host, Rob now works with BioBus Inc. delivering science to schools all over New York City with a bus full of microscopes, amazing samples, and funny games. Rob spends the rest of his time swimming and waiting for it to be Pi Day. Follow Rob @SweaterVestSci

Guest host Dr. Paula Croxson, PhD is a neuroscientist, science communicator, musician and open water swimmer. She received an M.A. from the University of Cambridge and a M.Sc. and a Ph.D. from the University of Oxford before moving to New York to run a neuroscience lab. She is now Associate Director for Public Programs at Columbia University's Zuckerman Institute.  She is also the flautist in alternative rock band Marlowe Grey and nerdy rock band Pavlov’s Dogz. The swimming is apparently for “fun.”

All ticket sales are final - ticketed events are non-refundable.
*Tickets should not be sold or transferred without JHAA approval.
JHAA Event Cancellation and Refund Policy